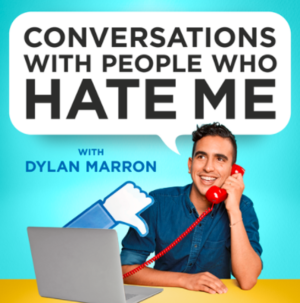 Could you forgive your son’s killer?

Imagine you’ve made a video about an issue you really care about. You’ve spent hours producing it and you feel vulnerable about telling the world what you think, but you also feel proud of what you’ve created.

You then post it online and someone comments underneath it, ‘You’re a piece of shit.’

How would you react?

This didn’t happen to me, it happened to the actor, writer and activist Dylan Marron.

Would you be upset? Angry? Maybe just ignore it?

I bet what you wouldn’t do is call up the person who wrote it, ask them how they are (in a really friendly voice) and then enquire as to why they wrote it – with a genuine curiosity to find out.

This is what Dylan does is his podcast series, ‘Conversations with people who hate me.’

I found it completely intriguing, inspiring and captivating listening.

The conversations follow a similar pattern. They start with the person retracting the insult and admitting they got a bit carried away, before explaining what it was about what Dylan said that they disagreed with.

By the end of the conversations, they have seen each other as humans rather than two usernames attacking each other on the internet, and have usually genuinely bonded.

Now, imagine that you are a 10-year-old black kid taking part in a Scout parade and white people start throwing stones at you. When you get home your mum explains that some people hate you just because of the colour of your skin.

Isn’t it quite likely you would start to fear and hate white people?

What you probably wouldn’t do is spend years reading all the books you could on racism and white supremacy in an attempt to understand why people might hate you for being black.

What you almost certainly wouldn’t do, is arrange to meet one of the leaders of the KKK so that you could ask him questions about his beliefs, invite him back to your house for dinner, befriend him and start to attend KKK rallies so you could understand them better.

That is what musician Darly Davis did. He tells the story in his TEDx talk. It ends with the leader leaving the KKK and giving Daryl his Klan robe.

I found this awe-inspiring.

If your son had been murdered, would you be willing to meet the man who did it while he was in prison and ask him why? Would knowing that he was just doing it to be part of a gang make you more or less angry?

When he got out of prison, would you support him in getting a degree and a job so that he can make something of this life? That is what David and Joan did. You can listen to the story in the Radio 4 series ‘The Punch’. It moved me to tears several times.

Our media is full of people being shamed for their behaviour, and so rarely are there stories that really seek to understand why someone did something awful.

To my mind, this leads to a culture in which we think some people are just ‘bad’ or ‘evil’. It leads to a barbaric criminal justice system that throws people in jail to rot, without considering what led them to commit their crime. It means we end up with leaders like Donald Trump, who are willing to subject themselves to the shaming media because they are shameless. A more sensitive human wouldn’t be able to take it.

What’s incredibly inspiring to me about all of the people I have mentioned is that even when someone has verbally or physically abused them, even when someone has murdered their son, they chose not to write the perpetrators off. They stood firm in their belief that this is another human being who deserves understanding and forgiveness.

I’m sharing these stories with you because, when I heard them, they deeply inspired me. They showed me that ordinary people are capable of extraordinary acts of forgiveness that can transcend all the shaming and trolling that consumes so much of our social and national media.

And, hopefully, knowing that someone else has done it makes it seem a lot more possible that you or I could do it too.

To people who hate Trump, this election result might have felt like a relief. The good guys won. But, as has been pointed out several times, this was not the rejection of Trumpism that many were hoping for.

He got more votes than last time, and those 71 million people aren’t going anywhere just because Biden won. Also, 70% of them believe it was not a free and fair election. That is a lot of people to have lost faith in the democratic process.

What interests me most about the US election is the level of polarisation, and the questioning of what is ‘truth’.

When the Brexit vote happened, there was a lot of talk about echo chambers. People in my social circles were sure Remain would win, because they didn’t know anyone who was planning to vote Leave and they couldn’t understand why anyone would.
It was widely believed that the Leave arguments were all based on lies and racism.

And it’s the same in the US election. People who support Biden, for the most part, have no idea how anyone could possibly support Trump, unless they are stupid, insane or evil.

As one of my friends put it on social media:

‘I mean, really, if this many Americans are still voting for someone that literally the whole world can see is an incompetent, racist, misogynist, corrupt, tax-avoiding, narcissistic liar with blatant dictatorial ambitions — in the middle of a pandemic and a recession — then there is genuinely no hope.’

However, Trump voters are also convinced that most, if not all, of these criticisms are true about Biden.

He is accused by Trump and his supporters of being senile and therefore incompetent; supporting anti-black legislation; sexual assault; corruption over his business ties with Ukraine; avoiding paying taxes; and being a pathological liar.

Also, just as Trump is arguing that this election has been rigged, the Democrats spent huge resources on arguing that the Russians had interfered with the 2016 presidential election and that Trump’s win was not legitimate.

To Trump supporters, their views are just as ‘obviously true’ as the Biden supporters believe theirs are.

So what’s really going on here?

How can we move forward if we can’t even agree on basic facts like who won the most votes?

Trump-voter hating is lazy
Personally, I think it’s lazy to think that if someone has a different view to you, there must be something wrong with them. We need to make more effort to understand the people on the other side of the debate — although it’s not really a debate anymore, it’s a shouting match!

What both Brexit and Trump voters seem to have in common is wanting to stick two fingers up to the establishment. Why? Because the system isn’t working for them and they are angry. They want someone to blame and someone to restore their faith in their country.

Death of the American Dream
A big part of the ‘American Dream’ is the idea that any individual can be successful if they work hard. Increasingly, that is no longer true — if it ever was.

The ratio between median household income and median house prices was 1.9 in 1970. It is now 4.1. In California, it’s 9.6.
During the same time period, wages have not kept pace and inequality has increased. The income of the top 1% has grown five times as fast as that of the bottom 90%.

A recent analysis by the Center for Household Financial Stability at the Federal Reserve Bank of St. Louis found that millennials have 34% less wealth than would have been predicted based on the experience of earlier generations.

There are a lot of young people living with their parents, saddled with debt, with no hope of buying a house and setting up a home for their family. It’s the same story in this country.

This isn’t just about economics, it’s about people losing faith in the myth that underpins their whole identity, and their sense of belonging, progress and meaning.

Not only does Trump channel their anger at the people they perceive to be to blame — corrupt politicians, rich financiers, a dishonest media and immigrants — he also promises to restore their faith in the country: to use the fact that he’s an outsider and a supposedly successful businessman to put things right.

I believe this also goes a long way to explaining why there are so many conspiracy theories around at the moment. It seems like some elite group of people are running things for their own advantage, at the expense of the majority.
Our civilisation needs a new mythology

As I’ve written previously, I think what’s really going on is even more fundamental than the breakdown of the American Dream: the myth at the core of our view of reality is becoming intolerable.

Philosopher Charles Eisenstein calls it the ‘Story of Separation’. In this story, we are all separate minds encased in flesh, in a world of separate competing individuals, all acting in their own economic and genetic self-interest, in a dead universe.

In what he calls the ‘New and Ancient Story of Interbeing’, we are all interconnected and interdependent. My wellbeing depends on everyone else’s, as well as on mother nature. By hating someone, I’m hurting myself. By being kind to someone or caring for the natural world, the whole system benefits. The whole universe is alive and conscious.

The financial and political systems in the UK and US have been built on the Story of Separation, and they are breaking down. It’s no one’s fault. There is no evil cabal making this happen; it is part of our evolution as a species.

Anti-Trumpers see the divide as being between stupid racist people and intelligent liberals. Maybe the real divide is between people who have lost faith in the system and those who haven’t.

I believe one of the best things we can do to aid this transition is to really stop and question ourselves whenever we realise that we are feeling hateful towards another individual or group. Are they really evil, or are they a decent human being, just like you, with a good heart, trying to make sense of this confusing world?

Based in Finsbury Park, near Holloway in North London, but able to work in the City and throughout London

©2021 Andy Hix is powered by WebHealer
Cookies are set by this site. To decline them or find out more visit our cookie page